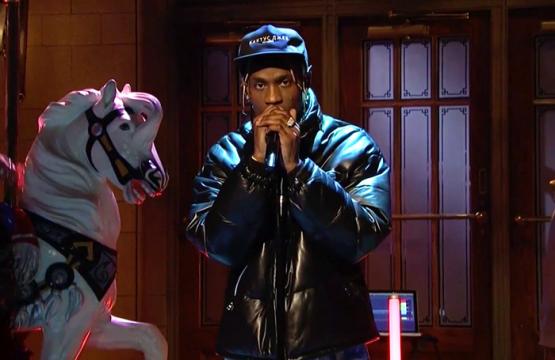 Following Kanye West’s appearance on last week’s premiere, the Houston rapper made his “Saturday Night Live” debut alongside host Awkwafina. As musical guest, he lit up the stage with two electrifying performances.

As a model danced on a carousel horse behind him, La Flame performed the Auto-Tuned track before segueing into another Astroworld track, “Astrothunder.”

He returned for a thrilling performance of his top 10 smash “Sicko Mode,” turning 30 Rock into an amusement park. As an image of the late DJ Screw was projected in the smoke, Travis emerged on a rotating device that spun upside down to create a dizzying effect. He then played some sound effects on the MPC before ending the trippy set while seated on the floor.

The high school thespian also participated in a hilarious sketch. He played Lil Bang Bang, a backup dancer for Mariah Carey’s 2014 tour, and showed off his moves while dancing to the “Jeopardy!” theme song.