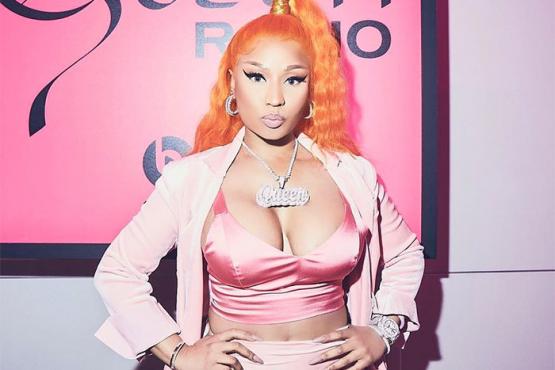 Has the Queen found her king? Nicki Minaj took to Twitter to profess her love for a mystery man. “i love new boi,” the rapper tweeted in the early hours of Wednesday morning (Sept. 5) before deleting the tweet.

It’s unclear who Nicki’s new love interest is, but during her appearance on “Ellen” this week, she alluded to a “new boy” in her life. “There’s a new boy, but he and I have kinda fell back a little bit,” she said before adding, “And then there’s like a newer [boy].” 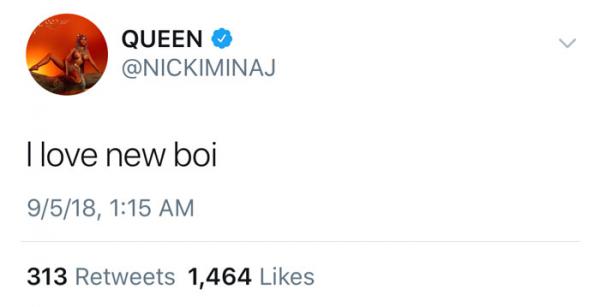 Nicki revealed that the relationship is “fairly new” and that “he’s been around for a couple weeks now.” But despite her newfound love, she said she’s not looking for a serious relationship. “I’m just chilling,” she told Ellen. “I’ve always been in a relationship my whole life. I was in a relationship since I was 15 years old. It’s the first time that I’m single and I’m happier, I’m more free.”

After ending her 12-year relationship with Safaree Samuels in 2014, Nicki was romantically linked to Nas and Meek Mill. “I was in a relationship with Meek for a while, and it was a very toxic something, but we had some good times and we ended that,” she said.

Fresh off headlining the Made in America Festival over the weekend, Nicki is gearing up to release the Hype Williams-directed video for “Barbie Dreams” as well as an Apple Music documentary. Her European tour with Future will kick off Feb. 21 in Munich, Germany.