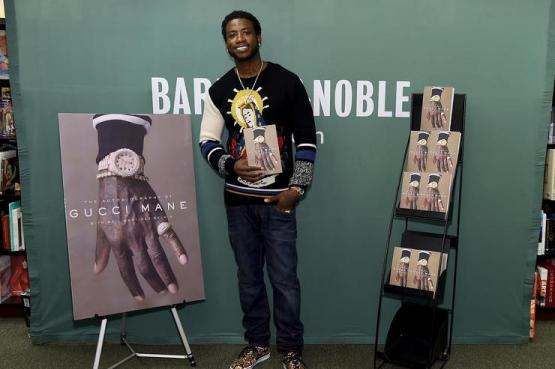 These titles by both rappers and hip-hop personalities should be at the top of your fall reading list.

Normally if you want to know a rapper’s thoughts on the industry you have to listen to their records. Yet every now and again we get insights into the world of hip-hop through a different lens: a tell-all book. The list of rappers and personalities who have taken to the page might surprise the casual reader, with everyone from Jay-Z to Gucci Mane having penned their reflections on life and fame.

These books give a long-form glimpse into the industry, making them must-reads for fans. Below, check out our list of ten essential books written by rappers and industry insiders, perfect for any hip-hop head.

From Pieces to Weight: Once Upon a Time in Southside Queens
Written by: 50 Cent & Kris Ex

The mind behind such classic albums as Get Rich or Die Tryin and The Massacre delivers a vivid look at his tumultuous beginnings and eventual climb to worldwide fame. Covering such topics as his mother’s murder when he was twelve, to his days of street hustling, this 2006 New York Times bestseller still serves as a memorable glimpse into one of hip-hop’s most successful and respected artists.

The legendary MC with twenty-one Grammy wins (and a massive seventy-four nominations overall) breaks down his career and some of his most memorable lyrics with this thoughtful read. While not an outright autobiography, the book manages to serve the dual purpose of lending insight into an iconic artist’s life and writing process. A critic from the New York Times called it “Compelling . . . provocative, evocative”, a solid endorsement by any account.

The Rose that Grew from Concrete
Written by: Tupac Shakur

This isn’t an autobiography, but rather a compilation of poetry. Published posthumously, this collection features some seventy-two pieces by the legendary West-Coast rapper, stemming back from when he was nineteen. The result is a candid view of an artist who delivered twelve powerful albums during his lifetime, and continues to dominate conversation over two decades after his untimely passing.

The Autobiography of Gucci Mane
Written by: Gucci Mane and Neil Martinez-Belkin

Published last September, this riveting account covers one of the most fascinating figures in hip-hop. This honest look at the rapper’s tumultuous – and ultimately victorious – life and career found its first words written while its author was still incarcerated. The book chronicles major facets of Guwop’s life – from humble beginnings in Alabama to the top of the charts. Not only that, but the book has notched Gucci the designation of being a New York Times bestseller.

My Voice
Written by: Angie Martinez

A fixture of the hip-hop industry for decades, radio personality and rapper Angie Martinez’s book offers a cohesive picture of the influencer’s experiences at Hot 97 and Power 105.1, as well as her high-profile interviews with some of the most recognizable names in the game. Martinez details her climb through the ranks as an intern to being one of the most sought-after personalities in hip-hop commentary. Readers will find candid looks at her interview with the late Tupac Shakur, as well as conversations with a not-yet-President Obama and R&B mainstay Chris Brown.

This intimate work covers one of the most respected hip-hop groups to ever step behind the mic. Perhaps the trippiest book on this list, The Wu-Tang Manual serves as something of a bible for the group, offering insights on their terminology as well as a thorough lyrical breakdown of some of their biggest records. While authored by RZA, the book also covers the nine-member group as a whole, an essential title for both new and old fans alike.

The multi-talented hip-hop mainstay extends his talents from the recording booth and big screen to the page. A New York Times Bestseller, Common offers a frank account of his upbringing and rise to fame in this provocative read. Everything from his youth in South Side Chicago to his initial career setbacks is explored at length, in a style that is both humorous and deeply personal.

E.A.R.L: The Autobiography of DMX
Written by: DMX and Smokey D. Fontaine

The artist behind one of the most distinctive cadences in hip-hop teams up with former TheSource editor Smokey D. Fontaine to offer a portrait of his life in and out of the recording booth. Sitting at a solid 352 pages, this work dives deep into the DMX’s struggles with the law and success on the charts. The revelations are often brutally honest, marking this work as one of the most enthralling on our list.

Black Privilege: Opportunity Comes to Those Who Create It
Written by: Charlamagne the God

The intensely forthright culture critic who once received bottles from Drake delivers a characteristically honest look at the world of hip-hop and a series of personally-tested principles that one should live by. In addition to covering his many trials and successes, the work also discusses his many interviews with high-profile figures such as Jay-Z and former presidential candidate Hillary Clinton. This book is a must for anyone still trying to carve out their path.

Confessions of a Video Vixen
Written by: Karrine Steffans

Everyone has seen hip-hop videos, but few know the stories of the many dancers in front of the camera. Karrine Steffans, dubbed “Superhead,” offers a poignant visual into the world surrounding rap videos, having danced for some of the most prolific artists in the genre including R. Kelly, Jay-Z and LL Cool J. Steffans shows a different side of what the public considers to be a generally glamourous world, detailing her experience with rape and physical abuse, among other difficult topics. While an oftentimes tough read, this tell-all book nevertheless should entice readers with its candor.