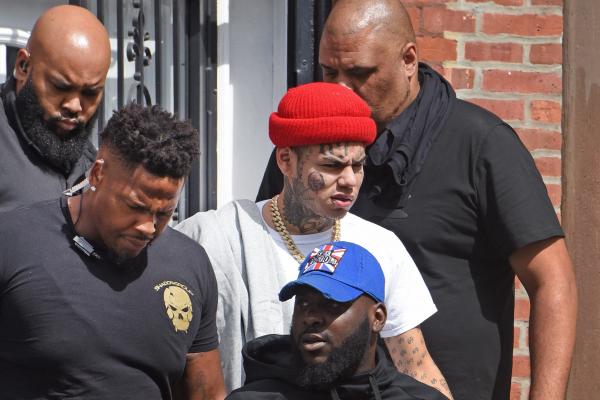 6ix9ine is rolling around with new security that used to work for Floyd Mayweather.

6ix9ine‘s been talking reckless since he came out of the gate with “GUMMO” so it doesn’t come as much surprise that he rolls around with heavy security.

Although he hasn’t necessarily been harmed from anybody he’s beefed with in recent times, he’s definitely become much more of a target.

After a kid tried to tackle 6ix9ine on stage during a European concert, it looks like the Brooklyn native recruited two former members of Floyd Mayweather’s security team to protect him from potential harm.

According to TMZ, 6ix9ine’s security team now includes two of Floyd Mayweather’s former bodyguards. The two men are known as “The Great Wall” which is a promising name for a couple of security guards.

Big Church and Big Adam were seen with 6ix9ine last week as the Brooklyn rapper made his way out of court in New York. Big Church is seen in the video below as the big guy in the back and Big Adam is the man with the leather jacket standing in the front with 6ix9ine.

These past couple months I been feeling like I been fighting for my freedom everyday. I live in a courtroom BUT besides that I keep smiling because 80% of y’all want me in jail & I KNOW GOD GOT ME ❤️ Because I’m still here 💛💜💙💚❤️💕 . . . . . . #6ix9ine #tekashi69 #tekashi6ix9ine #sixnine #tr3yway #tekashi #treyway #scumgang #6ix9ineny

The choice of new security comes after 6ix9ine was nearly tackled on stage during his concert in Moscow last month. The rapper’s team decided to beef up the security presence following the incident, although the security members that were on stage ended up stomping out the concertgoer.

Tr3yway CEO Shotty personally chose Big Adam and Big Church himself. 6ix9ine’s entire team is currently making some major changes in an attempt to boost the rapper’s career amid his legal battles.