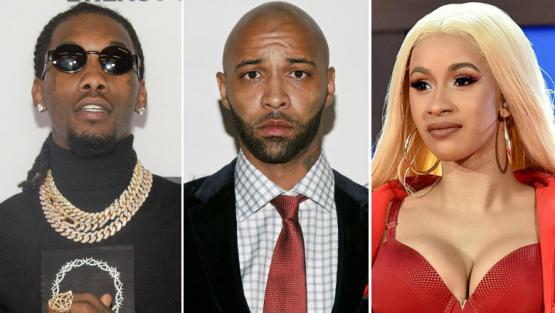 Offset and Joe Buddens beef is far from over.

Following Migos’ infamous confrontation with Budden at the 2017 BET Awards, Offset is taking aim at Budden once again over comments he made about his wife Cardi B while discussing her Fashion Week fight with Nicki Minaj on his Revolt show “State of the Culture.”

“Should Cardi B be fighting everywhere she goes?” Budden asked his co-hosts. “When you reach that type of status and success, it’s difficult for me to hear y’all continue to tell y’all that she’s this hood bitch from the Bronx. No, she’s not.”

Offset was quick to rush to his wife’s defense, blasting Budden in a series of comments on his Instagram page. “I watched ya show u a grown a** ni**a speaking on women,” said Offset. “I seen u in Barnes and u ran like I was gon do sum to you lol.”

Kulture’s father also issued a warning to the former Slaughterhouse rapper. “U a hoe ass n**ga soon u get touched u gone be police,” he wrote in a separate comment.

The two nearly came to blows on the red carpet at the 2017 BET Awards when Takeoff was asked by Budden’s former “Everyday Struggle” host Akademiks how it felt to be left off “Bad and Boujee.” Tension escalated after Budden threw his mic and walked out of the interview, resulting in a near altercation.