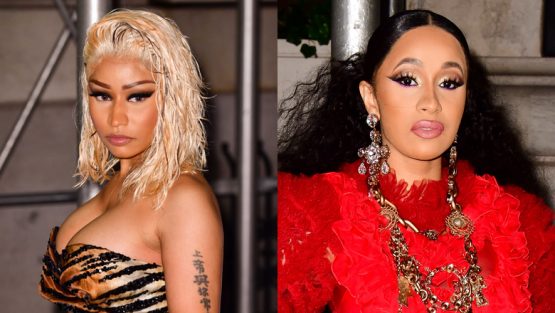 Cardi B is 1/2 in stiletto shotput. TMZ has learned that Nicki Minaj is standing pat after coming out the victor in a messy exchange with Cardi B. Many of you have already seen the footage, and Cardi is probably hoping that public memory doesn’t dwell too long. According to the report, Nicki isn’t too bothered that Cardi B chomped at the bit, which leads me to believe there’s more to the altercation than meets the eye. Nicki is after all reputed for her vengeful spirit (for all comers).

The botched attack which took place within the walls of a gala event connected to New York Fashion Week, reached its climactic end once Cardi B swung and miss with her shoe. Her success rate was far superior when she first used her shoe as a weapon. During a LNHH reunion show Cardi B weaponized her shoe for our viewing pleasure. She and cast member Asia became so consumed with their rivalry, they’d forgotten why they were fighting to begin with. Short answer: cheating allegations & Swift.

Rumor has it that the resulting lump on Cardi B’s forehead didn’t occur when she fell and lost her balance. According to her reps, the BX rapper took an elbow from one of Nicki Minaj’s security guards who reacted almost instinctively to his Queen’s call for help.