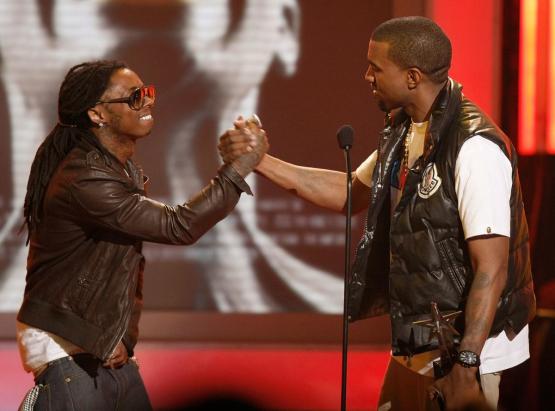 Kanye West has learned to stand toe-to-toe with Lil Wayne, if nothing else.

On the eve of Kanye West’s Yandhi deconstruction, we are left to ponder the explosive potential of concurrent Yeezy and Weezy album listens. This past week Kanye seemingly conceded defeat to Lil Wayne by announcing that he intended to stagger his Yandhi launch to Saturday-cum-Midnight.

It’s in our very nature as humans to stoke flames at the first sign of competition, even in instances where those bylines don’t exist. When Kanye conceded defeat to “his brother” Lil Wayne, it made us consider our own biases to an extent.

Upon further inspection, it became evident: this isn’t September 2007, a month of predetermined jousting between Kanye West and 50 Cent, a recording artist he had not built a rapport with, good or bad. Ultimately, Kanye‘s Graduation outsold Curtis by a wide margin, but the stakes were never personal, I hope you weren’t fooled.

The universe needs Ye and Wayne music at the same time

In 2018, Kanye West is already associated with a half-dozen projects to come out this year, so why even engage with Lil Wayne in the classical sense, in spite of the fact Tha Carter V is far too invested in its emotional boundary setting.

In 2007, 50 and Kanye manipulated the emotional intelligence of their respective fanbases, because they knew deep down their work wasn’t strong enough to withstand the test of time. The collective reaction to Kanye conceding defeat two days ago doesn’t account for the personal relationship he and Weezy have nurtured over time.

We collectively forget that people only fraternize within their ranks. For Kanye West and Lil Wayne, that social demarcation happens to be the Heavyweight division of an important subculture. In recent that social class has grown to include the rest of American celebrity culture, which rappers modulate at will when they aren’t being persecuted. Wayne and Kanye understand that too well.

The etchings of Kanye West’s friendship with Lil Wayne can be traced to the very same album that won out over Curtis in 2007. On “The Glory” off the Graduation, Yeezy acknowledges Lil Wayne’s street credibility in a way that lacks a certain element of foresight. The “wizened” Kanye West of 2018 would never venture anywhere without a compass (I say that quite ironically).

And yet, a genuine moment of mutual recognition takes place behind the scenes and on precipitated by “The Glory,” with bated breath — and without public record, I might add. When somebody shows love, no matter how crudely, a predisposition towards that individual is born, especially if that person has the power to influence others.

“After each and every show a couple dykes in the van
It’s easy
The hood love to listen to Jeezy and Weezy
And, oh yeah, Yeezy
I did it for the glory.”

Up to that point, all signs pointed towards Kanye and Weezy respecting one another, but nothing more than that. In May of 2008 their relationship went up a few notches after Lil Wayne solicited a verse from Kanye for his “Lollipop Remix.” In the late 2000s, DJ Khaled emergence as a “curator” gave rise to this idea that hip-hop that superseded the bubble of “urban radio” were given marching orders so as to appear greater than their roots. And thus the “Lollipop Remix” with Kanye was born.

A few months later, Kanye West produced two standout records on Lil Wayne’s Tha Carter III: “Comfortable” and “Let the Beat Build.” If you’re keeping count, it would seem that Weezy owes his friend one or two favors. But as history would have it: retribution mitigates itself, and their relationship would get frostier before it got even stronger.

Three years pass more or less, both men borrow from their shared experiences, they climb stages together, utter each other’s name favorably a couple dozen times. While this is occurring, rap feudalism is waged, both ugly and morose, sometimes by their own admission. Both men tippy toe their way to victory, no allegiance too precious or adulterous comes between them, not even a guilty by association verdict with Jay-Z as the intended target, stood in his way of appreciating a not-so-distant friend.

At a YMCB event taking place right before the Grammy Awards in 2012, Weezy entertained his guests by kicking a freestyle in which he disses The Throne, around the time Kanye and Jigga were purporting their supergroup. “I met a red-bone, I took the girl home, I asked her what she wanna watch, she said, surely not The Throne,” he rapped to a live audience. Shockingly nothing came of it.

Weezy’s fighting spirit helped catapult him further in the “Best Rapper Alive” discussions that were taking place, mostly on the Internet. Wisely. Kanye West chose to bypass any window he had to respond since he knew he was never the intended target.

Cycle back to 2018 with the knowledge you’ve accrued of Kanye’s temperament, and his reaction time becomes less staged and more apparent, especially in relation to an artist he’s been groomed to run side-by-side. When the image of Weezy & Yeezy posing together on the day of 2 Chainz’ nuptial surfaced, it conveyed that a sense of familiarity or intimacy had existed all this time, second only to the childlike manner in which they behaved.

Therein lies a reason to believe, that Kanye and Lil Wayne are like any of us, in the sense that we gravitate towards people on the basis of experience, and baed on emotional maturity. The trajectory of Lil Wayne’s friendship with Kanye West runs parallel with their stated desire to outperform every single artist outside their self-delineated bracket. Like an amulet you learn not to touch, Weezy and Yeezy both recognized within each other, a singularity that exist nowhere else on the horizon.