Leading off with the single “Noise,” a glowing, propulsive track of wavy synth and Dolly’s signature gauzy vocals. 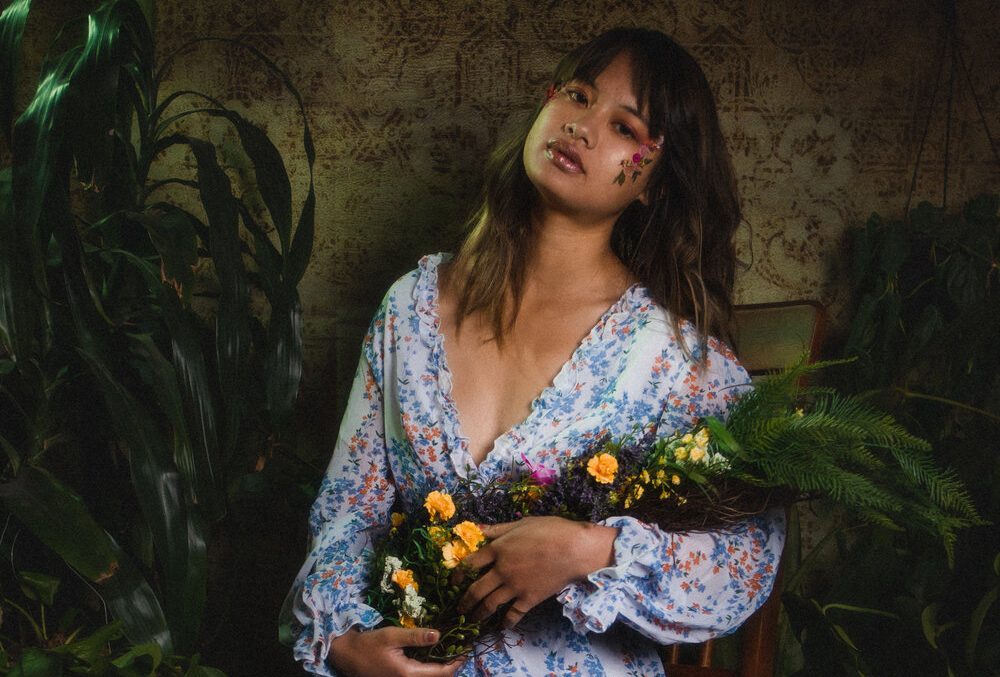 Fusing intimate, personal topics over soundscapes that weave between pop, R&B, soul, and electronic music is the specialty of newcomer Dolly Ave who released her debut album Sleep Today, May 7th. Having had a break-out hit with her 2020 collaboration on “Sunlight, Quiet, Flowers” with rapper Charlie Curtis-Beard – which trended #1 on TikTok’s Original Music charts for 7 days straight and over 428K streams on Spotify (and counting) – Dolly Ave is ready to make her own mark on the music scene with her first full-length offering to fans.

Written towards the end of 2019, Dolly’s seven-track record Sleep is a collection of lo-fi songs that sit at the intersection of pop, R&B, and bedroom vulnerability, as the tracks move through the ebb and flows of a relationship. “It’s not a heartbreak album,” Dolly insists, though she created the album freshly after a break-up while she was still in the throes of finding closure. “It’s definitely me finding empowerment in the vulnerability of each stage.”

Leading off with the single “Noise,” a glowing, propulsive track of wavy synth and Dolly’s signature gauzy vocals, was also, ironically, the last song written. Penned “in five minutes” during a random studio session with a friend in December 2019, it’s the crowning capstone of the project and contains the time-earned wisdom to match. “Don’t know what I saw/ Falling, falling over you,” she breathes, her voice delicate enough it nearly evaporates. “I had actually moved on completely [from the relationship], so [this song] sounds a little different from the other songs,” she says. “But I like that it’s empowering, and this is how I actually feel.”

However, the heart of the album beats on “Florida,” the project’s bittersweet, and penultimate track that also delivers in-hand a remarkable dose of compassion. Over a blanket of layered vocals and sunset-streaked instrumentals, Dolly gently reassures herself and, maybe, the listener: “It might take some weeks/ Just take the time you need/ Don’t get stuck on knowing why.” It’s a cleansing listen, one that feels synonymous with that twilight hour drive where worries finally dissipate and the world fractures back into clarity.

In a full-circle moment for the young artist, “Occupied,” an upbeat, hip-hop-leaning track, features Tim Atlas — a collaboration that Dolly says is “really lovely…that a girl from the middle of nowhere got to write a song with somebody she used to watch on YouTube.”

“I grew up in a situation and circumstances that were out of my control in a state where I felt like I couldn’t leave it,” she says. “I want someone to listen to [my music], someone not in a big city. Someone that can click on me and say, ‘She started out too. She started with a webcam, or no music experience and look, she’s playing something that is beautiful.’”

Dolly Ave is not only an emerging artist in the creative industry, but also an award-winning photographer who has worked with the likes of Kendrick Lamar, Chance the Rapper, and the Migos. Raised in Kansas City, Missouri by two immigrant parents from Vietnam, Dolly Ave speaks of her inspiration to pursue a creative career with an undeniable fervor saying that she makes music “for young artists, for the underprivileged, and for the misunderstood.”

Dolly’s parents worked as nail technicians and frequently moved the family between Sikeston, Missouri, and Kansas City in their search for jobs during her childhood. Dolly describes Kansas City as a “very strange place to immigrate to”: a small, midwestern town with not many other Asians, and with just as modest and simple expectations for life — to grow up and get a good job. Still, Dolly dreamed of bigger things. Her family was a creative one – her father played the guitar, and Dolly grew up listening to “all sorts of stuff,” from The Beatles to Vanessa Carlton, who specifically left a sizable impression on Dolly when she was younger because Carlton played the piano and sang at the same time.

In school, Dolly did theatre and choir, where she learned to sight-read and where one of her teachers remarked that the way she sang was “Eastern-wise,” she remembers. The advent of the Internet and with it, the vast and new world of YouTube, also played a significant role in Dolly’s formative years. “I noticed a lot of musicians would turn on the webcam and play their songs,” she says. “It blew my mind, like, ‘Wow people are just putting this out there in the world?’” Though she was shy and didn’t share any original music of her own on the platform, she was writing and singing little songs in her bedroom: sad and sweet tunes about feeling alone. “I was 12 singing about being lonely and sad,” she says now, laughing. As Dolly ventured deeper into the YouTube music community, she followed along as the creators she admired, among them Daniela Andrade, AJ Rafael, Tim Atlas, and Sam Tsui, grew their careers from homegrown cover videos to full-blown careers in their own right. “That sparked a lot in my journey in music and the arts,” she says. “This is not just something that always has to be a hobby.

There are avenues, or channels to make this a real thing, and [to] enjoy your life making it.” Eventually, at 18, Dolly left the narrow confines of Kansas City for art school in Chicago, where she bloomed. Propelled by the bustling and rich underground music and art scene of the city, one she describes to be tight-knit and immensely collaborative, Dolly found her footing in her own creative endeavors. She navigated the music community by way of her camera, having nurtured a childhood hobby into a career, taking photos and filming videos for local artists.

All the while, she continued to write songs on her own. In June 2018, spurred on by a moment of “what if” curiosity and her friend’s urgings, she recorded and released her first song, “Birds,” a melancholy, and contemplative tune with R&B leanings about finding “the legs to run.” Shortly thereafter, encouraged by the unknown potentials of her own creativity, she began working on her first project, the Sleep, which has finally come to fruition as Dolly Ave steps into the spotlight for the first time with a full-length record.

Connect with Dolly Ave on social media for updates on new music, videos, and more; @dollyave