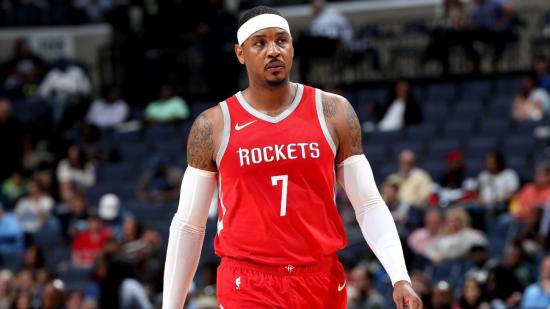 After days of rumors that Carmelo Anthony’s brief stint in Houston was on the verge of coming to an end, ESPN’s Adrian Wojnarowski reports that the Rockets are expected to part ways with the 10-time All-Star.

Woj reports that the team has no immediate plans to waive Melo, and that an official announcement is expected to come prior to tonight’s nationally televised game against the Golden State Warriors. Anthony, 34, will reportedly remain on the Rockets’ roster for the time being but will not rejoin the team.

In 10 games with Houston, Anthony averaged a pedestrian 13.4 points and 5.4 rebounds in a career-low 29.4 minutes per night, but he’s certainly not the reason why the team is just 6-7 thus far. Dwyane Wade is among those who have shown support for Carmelo amid reports of his fallout in Houston.

“Trying to make my guy @carmeloanthony the fall guy huh!?” Wade recently tweeted. “Man y’all need to stop. That’s the easy way out instead of addressing what the real problem.” Additionally, Wade endorsed a tweet from AP basketball writer Tim Reynolds, “Melo deserves better than this.”

On the flip side, Tracy McGrady has advised Anthony to just retire.

“I honestly think Melo should retire. I really do,” McGrady said during Wednesday’s taping of ESPN’s “The Jump” (H/T Yahoo Sports). “I don’t want him to go through another situation like this and people are just pouring negativity on this man’s legacy. I really think, because it hasn’t worked out the last two teams, you have a Hall of Fame career, just go ahead and let it go.”

The Rockets will host the Warriors tonight at 8pm ET, airing on TNT.

“After much internal discussion, the Rockets will be parting ways with Carmelo Anthony and we are working toward a resolution,” said Morey. “Carmelo had a tremendous approach during his time with the Rockets and accepted every role head coach Mike D’Antoni gave him. The fit we envisioned when Carmelo chose to sign with the Rockets has not materialized, therefore we thought it was best to move on as any other outcome would have been unfair to him.”

Carmelo Anthony’s brief stop with the Houston Rockets is over, league sources tell ESPN. Anthony will part ways with team, although there are no immediate plans to place 10-time All-Star on waivers. Team announcement is expected before Rockets play Golden State tonight.

For now, Anthony will remain on the Rockets roster, but will not rejoin the team, sources said. Anthony’s wisest course of action could be exercising patience and allowing changes in league rosters – through trades, injuries, team needs — to create more playing options for him. https://t.co/L5aC5Ueah0