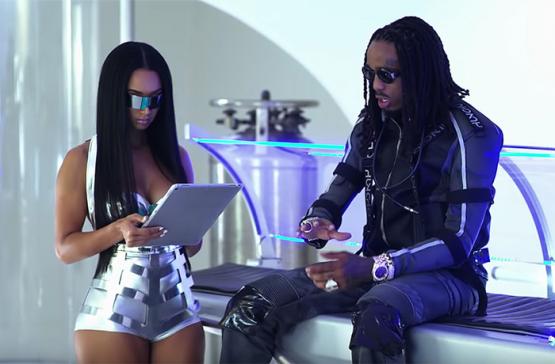 Quavo Bubblegum Video – As he prepares to release his solo album Quavo Huncho on Friday (Oct. 12), Quavo unleashes the video for “Bubblegum.”

After teaming up with Saweetie in the “Workin Me” video, Quavo casts Draya Michele as his leading lady in the futuristic clip, which he co-directed with Daps. In the midst of an apocalypse, Quavo tries to escape his reality by putting on a VR headset.

He is transported to another galaxy filled with beautiful women who perform tests on him in a space lab. But when he returns to reality, his girl is still by his side.

“Bubblegum” follows the videos for “Workin Me” and “Lamb Talk,” all singles off Quavo Huncho, which drops Friday. The solo project is set to feature Drake, Cardi B, Travis Scott, Kid Cudi, 21 Savage, Saweetie, and more.

In his interview with GQ, Quavo also teased a potential joint project with tourmate Drake. “That will be a whole lotta bangers,” he said. “I don’t even think we would play around and do regular music. We wouldn’t play. We will be just like a whole smash.”

Last night, Quavo stepped out to the American Music Awards with girlfriend Saweetie. He and Migos also picked up their first AMA ever for Favorite Duo or Group – Pop/Rock.

Quavo and Saweetie boo'd up in the audience #AMAs pic.twitter.com/BdAlEyM0PY