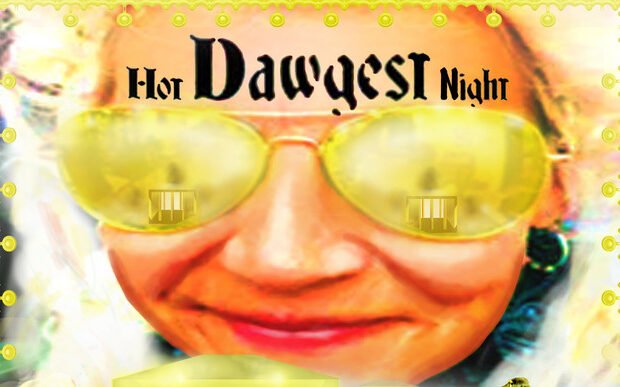 With an ever-expanding global fan base of fans from 16 to 80 hinging on her every rhyme and clever twist of phrase, Rebecca “DawgGoneDavis”’ breakthrough success over the past five years has proven one thing – rap and hip-hop ain’t just for kids and hipsters anymore.

Since her freewheeling, autobiographical “Middle Age Woman – Hip Hop Style” reached #1 on the influential EuroIndieMusic chart and hit the top spot in Europe, Asia (including Russia) and South America, she’s been on total worldwide fiya – as in “Butt on Fiya,” her second single, which found her mocking the breast cancer she beat and compensating for her removed mammaries with a genetically blessed rear end.

Watch a video for the single “Butt On Fiya” – which went to #3 on the World Indie Music Chart – on YouTube.

Her offbeat yet “can’t stop listening if you tried” debut album Hot Dawgest Night includes these two tracks, along with six other smashes and the brand-new song “I Will Still Love You,” a clever and colorful ode to the music that captured her heart while playing basketball – from Smokey Robinson, Motown and Bobby Darin to The Crystals, Ronettes and Sex Pistols. The collection’s title blends her quirky stage name with her over the top appreciation for Neil Diamond, who also merits a mention (along with Elvis and the Black Eyed Peas) in “Middle Age Woman – Hip Hop Style.”